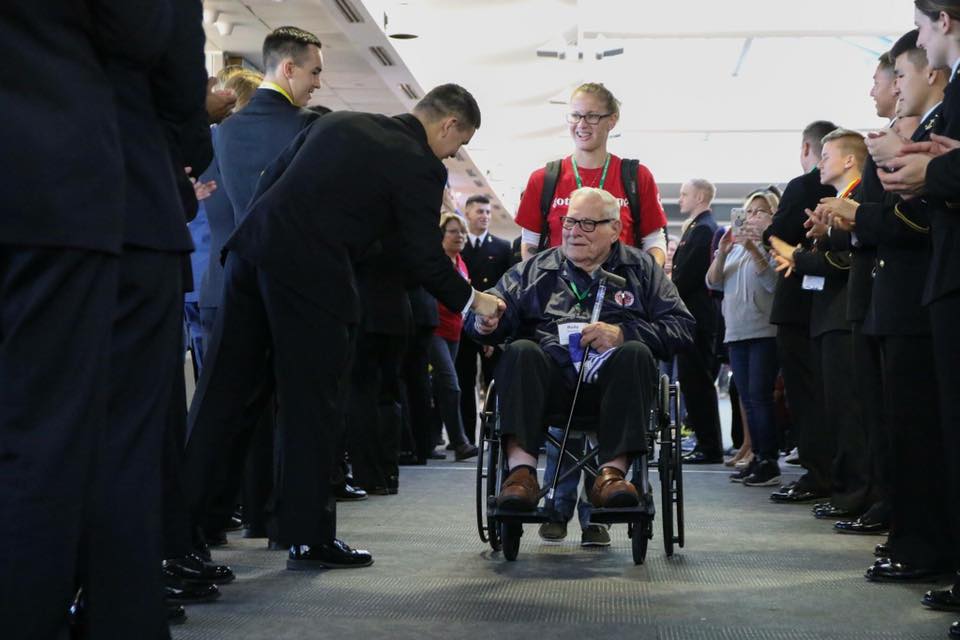 Stars and Stripes Honor Flight, Inc. was started in 2008 by Joe Dean after Dean had seen a brief national news segment on the National Honor Flight Network. He was inspired to bring this program to Southeastern Wisconsin. Within days, wheels were in motion.

The Stars and Stripes Honor Flight, Inc. story was told one person, one small group at a time, and grew from tiny fundraisers to partnerships with many local businesses, organizations, and individuals, who have all stepped forward to ensure that our WWII, Korean and Vietnam War veterans feel appreciated.

The Honor Flight Network was co-founded by Earl Morse, the son of a Korean and Vietnam War veteran, and Jeff Miller, a small business owner and son of a WWII veteran. The Honor Flight program was conceived by Earl Morse, a physician assistant and retired Air Force Captain. Earl was working at a VA clinic in Ohio when then the World War II Memorial in Washington D.C was finally completed and dedicated in May of 2004. Earl repeatedly asked his veteran patients if they would ever travel out to visit their memorial. But, for most of these senior heroes in their eighties, it simply wasn’t financially or physically possible for them to make the journey on their own.

That’s when Earl decided to do something to help. In addition to being a physician assistant, Earl was also a private pilot and a member of one of our nation’s largest and best aero clubs located at Wright-Patterson Air Force Base in Dayton, Ohio. In December of 2004, Earl asked one of his World War II veteran patients if it would be all right if Earl personally flew him out to D.C., free of charge, to visit his memorial. Mr. Loy broke down and cried. He told Earl that at his age he would probably never get to see his memorial otherwise, and graciously accepted the offer.

Earl posed the same question to a second World War II veteran a week later. He, too, cried and enthusiastically accepted the trip. It didn’t take long for Earl to realize that there were many veterans who would have the same reaction. So he started asking for help from other pilots to make these dreams a reality. There were two major stipulations to his request. The first was that the veterans pay nothing. The entire aircraft rental ($600 to $1200 for the day) would have to be paid solely by the pilots. The second was that the pilots personally escort the veterans around D.C. for the entire day. Eleven pilots who had never met his patients stepped up to volunteer. And Honor Flight was born.

In May of 2005, six small planes flew 12 very happy veterans out to the World War II Memorial. The responses from both the veterans and the pilots were overwhelming. By the end of the first year, Honor Flight had transported 137 World War II veterans to their memorial. In late 2005, Jeff Miller, a dry-cleaning company owner in Hendersonville, NC, inspired by Morse, had a similar idea but on a larger scale—he wanted to charter commercial jets. Jeff shared Earl’s concern that local WWII veterans would never get to visit their new memorial. He formed HonorAir and began flying large groups of WWII veterans from the Asheville Regional Airport on chartered jets. By the end of 2006, HonorAir had flown more than 300 WWII veterans to their memorial. Thanks to Jeff, hundreds of these senior heroes successfully made the trip to Washington D.C.

In February of 2007, Morse and Miller met in Washington, DC at the first “Summit” and merged Honor Flight and HonorAir into what is now known as the Honor Flight Network.

In the Spring of 2008, Senator Bob Dole nominated both Earl Morse and Jeff Miller for the prestigious Presidential Citizens Medal. The medal was awarded to Morse and Miller by President George W. Bush in the Oval Office in December of 2008.

To date, there are approximately 140 Honor Flight Network regional hubs across the United States. The Honor Flight Network has escorted nearly 250,000 WWII, Korean War, and Vietnam War veterans to see their memorials in Washington, DC. This is done at no cost to the veterans.

Every Day is a Bonus.